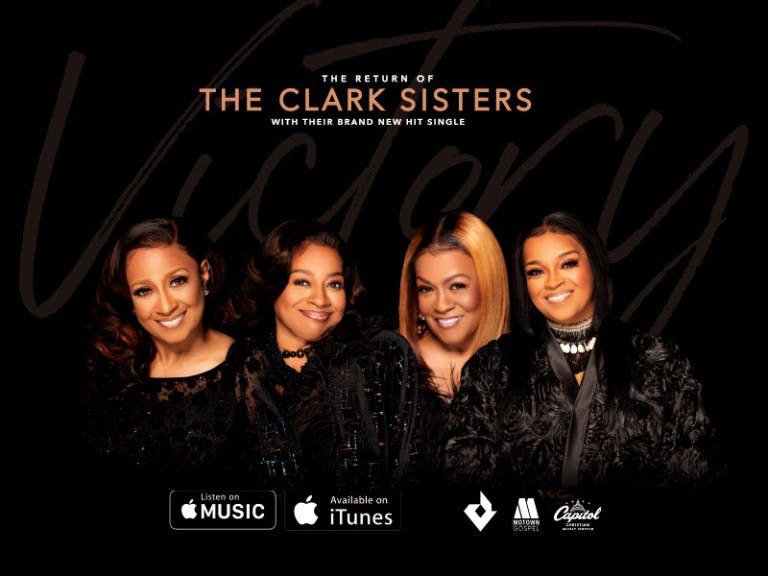 Karew Entertainment in partnership with opens in a new windowMotown Gospel is excited to announce the newest single, “ opens in a new windowVictory”, from the legendary gospel group, The Clark Sisters, is available now on Apple Music! This song was written by group member Karen Clark Sheard and her son J. Drew Sheard (who also produced it).

This is the first single from the forthcoming album set to be released in Spring 2020. Other producers to be included on the project include Kirk Franklin, Donald Lawrence, Warryn Campbell, Rodney Jerkins, Kurt Carr, and Mano Haines.

About the Clark Sisters:
Born and raised in Detroit, MI., The Clark Sisters are a legendary and iconic Gospel music group comprised of sisters Jacky Clark Chisholm, Elbernita “Twinkie” Clark, Dorinda Clark Cole, and Karen Clark Sheard. The daughters of renowned Gospel musician and choral director, Mattie Moss Clark, they have been singing and performing together since 1966. The recipients of numerous notable awards and honors, including 2 GRAMMY Awards, The Clark Sisters have produced 20 albums to date. Revered by numerous Pop and R&B artists such as Mariah Carey, Jill Scott, Beyoncé, and Xscape, The Clark Sisters were honored at the 2016 Essence Music Festival for their musical contributions with remarks from Mary J. Blige, Queen Latifah, Missy Elliott, Kierra Sheard and Yolanda Adams. Their vocals were most recently featured on the latest projects by Hip-Hop artists Jay-Z and Snoop Dogg. Credited for helping to bring gospel music to the mainstream, The Clark Sisters are considered pioneers of contemporary Gospel music. Some of their crossover hits include “Blessed & Highly Favored,” “Is My Living In Vain?,” “Hallelujah,” “He Gave Me Nothing to Lose,” “Endow Me,” “Jesus Is A Love Song,” “Pure Gold,” “Expect A Miracle,” and “You Brought The Sunshine,” their largest main- stream crossover; which was often played on Urban/R&B radio formats and club venues. The Clark Sisters are the highest-selling female Gospel group in history with millions of record sales to their credit. Their biopic, executive produced by Mary J. Blige, Missy Elliott, and Queen Latifah will broadcast premiere nationally on Lifetime Networks in Easter Sunday 2020.