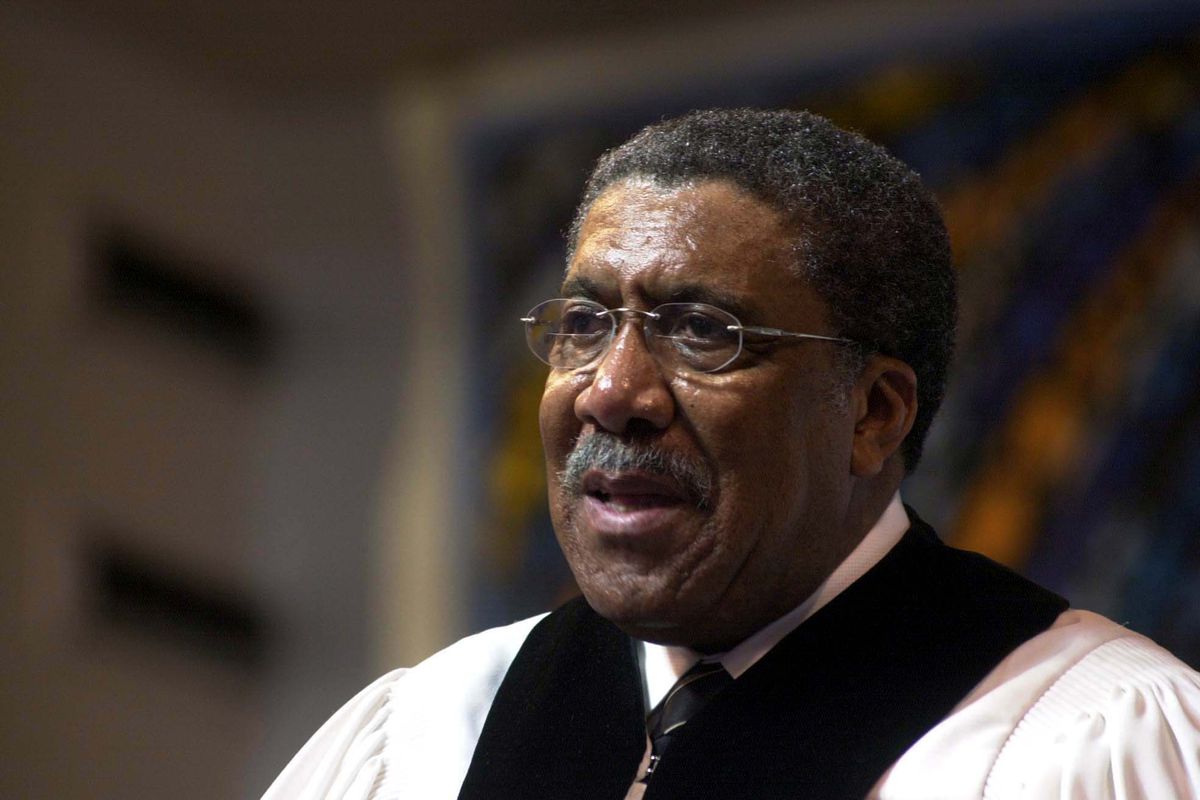 The Journal of Gospel Music was saddened to learn of the passing today of the Reverend Dr. Clay Evans, founder and pastor emeritus of Fellowship Missionary Baptist Church in Chicago. Our deepest sympathies to Ms. Lou Della Evans Reid, Rev. Pharis Evans, the rest of the Evans family, and the Fellowship M.B. Church community.

The following is a short bio that I wrote for the Malaco Music Group website, with the generous assistance of Ms. Patty Nolan-Fitzgerald:

Reverend Dr. Clay Evans
An iconic pastor, singer, songwriter, recording preacher, community organizer, and civil rights leader, the Reverend Dr. Clay Evans was born June 23, 1925, in Brownsville, Tennessee, to Henry Clay and Estanauly Evans. He migrated to Chicago in June 1945, at age 20, with plans to be an undertaker, but he could not afford the tuition fee to attend mortuary school. Instead, he worked at a pickle factory, as a window-washer, as a pie truck driver, then found work at the Brass Rail, a local lounge, and dreamed of a future as a big band singer.

He sang in the choir at Tabernacle Baptist Church choir and directed the church’s junior choir. He was in a quartet called the Soul Revivers and was then invited to join Chicago’s famed Lux Singers, a gospel group that included a young James Cleveland. Evans’s first song composition, “By and By,” became a Lux Singers staple and was an early 1950s hit for the Davis Sisters of Philadelphia.

By September 1950, Evans had received a calling to ministry. He organized Fellowship Baptist Church on Chicago’s South Side. He organized the church choir that same month. His sister Lou Della was the first musician; their brother Pharis directed the choir. In 1953, Willie Webb served as Minister of Music, and then Albert Goodson came in 1955 to serve as Minister of Music. In 1958, Milton Brunson became Director of the Inspirational Choir at Fellowship. Lou Della was named Minster of Music for Fellowship sometime in the late 1950s or early 1960s.

Evans’ choir recorded its first album in 1962. The independent project was produced by pioneering female record company owner Idessa Malone and included a cover of Stuart Hamblen’s “It Is No Secret.” The song became Evans’ pastoral theme and personal mantra.

When Evans met Jesse Jackson in 1965, he became more involved in the Civil Rights Movement. They began Chicago’s Operation Breadbasket, meeting at Fellowship to organize; it later evolved into Operation PUSH (People United to Serve Humanity). Evans served as Chair of both organizations. But his support of Dr. King and his outspokenness on Chicago’s legacy of segregation and discrimination came at great personal cost. Local government and business officials who took umbrage with his and King’s stance conveniently delayed loans for, and stopped construction on, the new Fellowship Church building at 45th and Princeton Streets. The steel skeleton of his unfinished church stood for seven years.

After several independent releases with Malone, Fellowship landed a record deal with Jewel Records in Shreveport, Louisiana. For fifteen years, beginning in 1970, Jewel released albums and singles by the choir as well as album-length sermons by Evans. Songs such as “May the Lord Bless You Real Good,” “Come on Down,” and “It’s Real” gave the Ship a national reputation.

In 1975, Evans organized the Broadcast Ministers Alliance of Chicago, an association of radio and television preachers, to assist with advocacy of quality healthcare, voter registration, and other social services for the disenfranchised. Along with the Broadcast Ministers Alliance, Evans formed AARC, the African American Religious Connection, to support black-owned vendors. Working with other ministers, Evans began Concerned Clergy for a Better Chicago, a group that voiced the needs of the black community to the Office of the Mayor.

Fellowship signed with Savoy Records in the mid-1980s. By then, the contemporary sound reigned in gospel music, but Evans and the Ship remained true to the traditional gospel choir sound pioneered in Chicago. Their stance was successful. The choir released a series of popular albums for Savoy, including Things Are Going To Work Out Somehow (1985), He’ll Be There (1988), and Reach Beyond the Break (1990).

Evans continued to record throughout the 2000s, but in 2010, he transferred the pastorate of Fellowship Missionary Baptist Church to the Reverend Charles Jenkins. He continued to preach, preside at the funerals of old Fellowship members, and counsel the daily stream of visitors and callers who sought his advice.

The legacy of the Reverend Dr. Clay Evans is being properly curated. The Chicago Public Library has a collection of his papers, and the Black Gospel Music Restoration Project at Baylor University is digitizing hundreds of hours of his sermons and old Fellowship broadcasts. In March 2017, the Stellar Awards honored Rev. Evans with the Ambassador Dr. Bobby Jones Legends Award.

SOURCE: opens in a new windowThe Journal Of Gospel Music