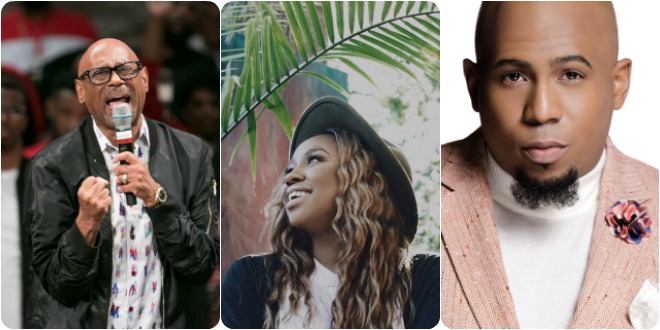 Anthony Brown & group therAPy earned a nomination for their Gospel Go Go track. “Blessings on Blessings” (Key of A/ Tyscot / FairTrade), in the category of Urban/Inspirational Single or Performance of the Year. The song held the top spot on the Billboard Gospel Airplay chart in the fall of 2019.

Casey J’s sophomore album, The Gathering, which features the Top Ten radio single, “If God/Nothing but the Blood” (Casey J/ Tyscot/ Integrity), pulled the former schoolteacher a nomination in the category of Contemporary Female Vocalist of the Year.

Members of the legendary Thompson Community Singers aka The Tommies earned two nominations as The Tommies Reunion. Their Tommies Reunion (Seven Legend / JMG / Tyscot) project earned them acknowledgements in the Traditional Album of the Year and Traditional Choir of the Year categories. The set’s Top 20 radio single, “He Worked It Out,” has amassed over 200,000 Pandora streams. Choirmaster Earl Bynum received a nomination for his solo album, This Song is For You, in the Traditional Male Vocalist of the Year category.

Tyscot is also venturing into Children’s media and earned a nomination as Youth Project of the Year for the album, Gospel Kids Present Christian Soldiers (Tyscot).  ”It feels great to know that something I put so much hard work into to reach our youth is being recognized by such a prestigious organization,” says Bryni Tiggs who curated the set. “I pray that I can continue to use my talents to reach God’s people.” The 35th Stellar Gospel Music Awards ceremony will take place March 27, 2020 at The Orleans Arena in Las Vegas, Nevada.

Stellar Awards 2020 Nominees Are In!