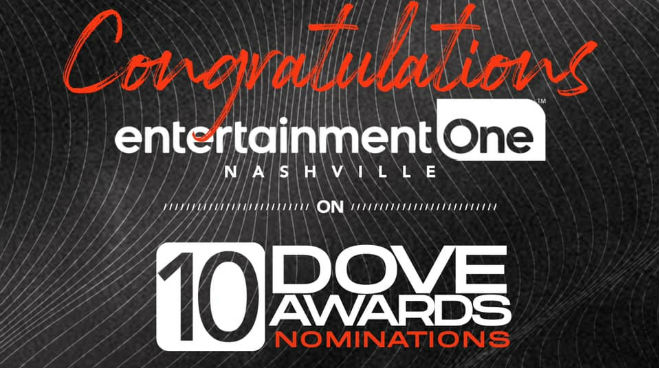 (NASHVILLE, TN) – August 13, 2020 – Entertainment One Nashville celebrates a total of 10 nominations for the 51st ANNUAL DOVE Awards across various categories. Voting for the final winners will run August 20th through August 27th. The celebration will air exclusively on TBN (Trinity Broadcasting Network) on Friday, October 30th.

“It is our esteemed pleasure to serve and champion our artists’ creative work and to expose, promote, and advance the Kingdom of God through ministry in song. We are excited about receiving 10 nominations in this current climate, as it serves as a symbol of hope for our artists and teams that we indeed have a future and expected end beyond this time.I am elated that Jonathan McReynolds, Todd Dulaney, Pastor John P Kee, and JJ Hairston are named amongst those being celebrated by The Gospel Music Association. I am truly grateful,” shares Omega George, Entertainment One’s Director, Marketing, Label Relations and Strategic Partnerships, Music.

Gospel Artist of the Year

Contemporary Gospel Album of the Year

Contemporary Gospel Album of the Year

Traditional Gospel Album of the Year

Gospel Worship Album of the Year

Long Form Video of the Year

Entertainment One Ltd. (eOne) is a talent-driven independent studio that specializes in the development, acquisition, production, financing, distribution and sales of entertainment content. As part of global play and entertainment company Hasbro (NASDAQ: HAS), eOne’s expertise spans across film, television and music production and sales; family programming, merchandising and licensing; digital content; and live entertainment. Through its extensive reach and scale, and a deep commitment to high-quality entertainment, eOne unlocks the power and value of creativity.